A Tree Grows in the Bronx: The Story of How I Secured a Home for The Lit. Bar

Three years and four days after it’s conceptualization, I have finally secured a permanent space for The Lit. Bar *cries in real-estate struggle*. Check out the awesome footage my lawyer caught of my big lease signing moment below. (For $400/hr I should’ve gotten a goddamn video drone, lights, hair, and makeup; but this will do.)

Signing my life away for the culture. I CLOSED ON THE LEASE FOR @THELITBAR! THE BRONX IS GUARANTEED A HOME FOR OUR BOOKSTORE FOR ATLEAST THE NEXT 10 YEARS!!! My 45-day clock to design the "graffiti & chandelier" themed space and go through the crazy liquor license process starts tomorrow–so please forgive me in advance for any emails, dms, etc. I may miss during this next phase. My landlord is taking a big risk to help me be great and ain't playing no games with me. The first people to get details on the exact location in #MottHaven and grand opening celebrations will be my email subscribers, so make you're signed up at www.thelitbar.com. Thank you so much to everyone who stood along side me screaming #THEBRONXREADS with their voices, dollars, and support. Thank for getting me off of public transportation. IT'S LIT!!!

Before I fill you in on how I got here…

First, my apologies for the radio silence. The past few months have been so hectic that I’ve had to abandon long-form content and rely on social media for quick and effective engagement. I’m still a mess, so I’m not promising to do better, lol. Follow me @1st.noelle for insight into my daily grind.

Highlights of my August, September, and October…

I designed, ordered, packed & shipped around 1,800 crowdfunding perks (gifts my backers received for supporting my campaign). If you ever plan on crowdfunding, my advice is to keep your incentives simple. Never again, B.

I'm definitely having the time of my life, but idk why people think I get to chill on a yacht with Puffy after raising start-up capital. This is what my 9p-2am then 6am-8am really looks like… hot… tired… hungry… titties on the floor. #entrepreneurlife

I was the bookseller for Survive & Thrive–a weekend bootcamp for entrepreneurs where I sold books for Kevin Harrington (yas, from the tv show, Shark Tank) and Jessie Itlzer, owner of The Atlanta Hawks. It took place at the beautiful Connecticut campsite, Club Getaway. Turns out God knew exactly what He was doing when He dropped me off to my parents in the Bronx, 1986; nature is not for me.

Life came full circle, and I was asked to give the closing remarks at the 2017 New York StartUp! Business Plan Competition. I placed second in this very competition last year and I directed my message towards the “losers”. I remember being in their disappointed shoes and wanted to assure them that there are so many successes and hardships to be had after the competition. I closed with tips on leveraging their participation; just getting through to the end provided me with so many opportunities and valuable relationships. 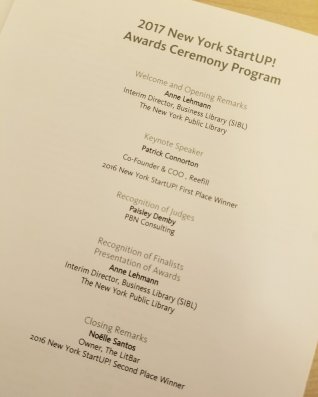 I gave a speech for the Hispanic Chamber of Commerce on crowdfunding. Speaking is becoming a thing in my life. Who knew? Great, because my bookstore isn’t going to pay me for a loooong time.

I brought in October with an author event at the cemetery. Seriously; the book was about suffragists who fought for women’s right to vote and a couple of them were buried right here in the Bronx. I hope I’m not going to bookseller hell for capitalizing off of dead people.

I attended the fall conference held by my regional trade association, NAIBA. There, I picked up a ton of education and hung out with my favorite poet, Elizabeth Acevedo.

I was honored by the New York Yankees! I received their Hispanic Heritage Month Community Achievement Award. I got to stand on the same home plate Derek Jeter stood on and everything! I also stood on the freshly painted Yankees symbol that I was specifically warned to watch out for. Whoops!

Most recently, I was named Jacoby & Meyers’ Hero of the Month. I was injured by the loss of our only bookstore, so lawyers and compensation made sense.

Books club is still lit… every single month. Membership is now at 550 women and there’s a waiting list for every event. I can’t wait until I open and have the capacity to host more often.

With all of this on my plate, I am still navigating regular millennial life: still working full-time for the man, alternate side parking, America’s political climate while being black, and mourning the loss of my uncle, Victor Santos. Life is good… but it’s heavy.

The winning neighborhood is Mott Haven. I had completely given up on my top choice neighborhood once reality set in that gentrification has already sunk it’s teeth into the South Bronx. While on the surface it appeared as though I had plenty of real estate to choose from, I was faced with above-market rate rents or property owners holding on to their spaces for dear life, waiting for more affluent tenants to express interest.

“America invested all of this money and trust into me and I’m failing them.

Stop honoring me with these awards!

I set my sights on the next neighborhoods north and nothing would pan out. Property owners became more welcoming, but their spaces were either inaccessible by public transportation, needed extensive structural work, were located in drug-infested communities, were too small, or didn’t have the foot-traffic I need to support my sales projections. I swear I reached out to every broker in the Bronx only to learn that they “only represent Harlem and Brooklyn properties”. I could hear their “new money” pinkies pointed upward over the phone.

Depression kicked in; some days I called out sick and did absolutely nothing. My relationship suffered. Meanwhile, my industry friends are opening bookstores all over the other boroughs and I’m getting dozens of emails and social media comments asking “when are you opening?”, “can I work for you?”, “you inspire me to stay in the community and improve it myself”, “you showed me that I can accomplish anything I want in life”–signed little black girls from the Bronx watching you. I was tormented by all the love.

America invested all of this money and trust into me and I’m failing them.

Stop honoring me with these awards!

Then right before I was going to jump off the Third Avenue Bridge (not literally), the broker I worked with on the very first space I looked at years ago called and said he thinks there’s an opportunity for me in a new building under construction. I laid all my charm on property owners a few days later; the day after that, I had the first draft of my commercial lease.

The lease negotiation process was not at all fun. I’ll save the story of my month’s long anxiety attack for another time. I signed the eight-billionth draft yesterday, Halloween, and paid the security deposit and first month’s rent.

Our home is 1,700 square feet on the ground floor and I have around 600 square feet in the basement I intend to use for an office, storage, and content studio. The windows are huge and allow for amazing reading light and selfies. The layout is a little weird, but I think the nooks & crannies will make good for couches. The space for our bookstore is guaranteed to our Bronx readers for at least 10 years (provided that I survive).